“I fall a little bit in love with everyone.”

Simon is gay, closeted, and likes to keep it that way for now. He’s happy with his friends, the play he’s in, and his e-mails with an anonymous gay boy, Blue. But then an e-mail falls into the wrong hands, he’s being blackmailed, and his world is turned upside down.

Usually I’m a little sober in my reviews, but I just can’t be for this one, because oh, my god, it’s so good and sweet and cute. I have to gush. I’ve been hearing so much about this book in the online book community and for a while I thought, it’s so hyped up, it can’t be that good. Then I started getting curious. Then I started get 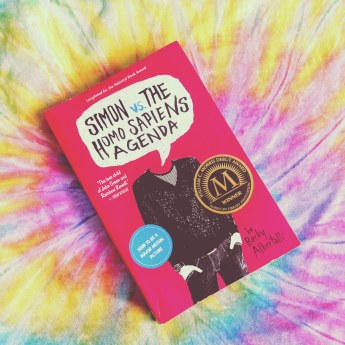 ting excited. Last Monday I finally borrowed my dear friend’s copy (BarelyABlogger, go check out his book blog!) and I finished it Wednesday morning. Remember, I’m not a fast reader at all, but I just loved this book so much right from the beginning I just couldn’t stop. I read for hours on Tuesday and I kind of just want to reread it again right now.

The writing just flows perfectly. I love how it really sounds like Simon’s unique voice, and not like the voice of the writer (that happens a lot actually, even in first-person). It’s just so light and natural and I wasn’t even thinking about the writing. I was completely forgetting I was reading a book, actually, so vivid was this world Albertalli created, with these cute and awkward teenagers. And that opening scene! Damn that’s what I call an opening.

The characters are just amazing. They’re so cute and real, and so truly teenage-y. Meaning; they’re good kids but they also make weird mistakes and are awkward and cringy sometimes. I especially love the friendships/relationships between these characters. Like how they know each other for so long, but still miss certain important details, but love each other so fiercely. And Simon’s family is hilarious and cute. And they’re all so funny!

And, man, the plot! It’s just so cute. Like, yeah, nasty things happen, but the cute and nice stuff vastly outweighs all that. And everything that’s not so nice is fought against by people who are on Simon’s side, or people ask for forgiveness and know they were wrong. The drama just never feels all that drama-y like it sometimes does in YA. It doesn’t crawl under your skin. It isn’t made to shock you or convince you to read on, it’s just life.

But also, I just had so much fun reading this. Pure, unadulterated fun. There wasn’t a moment that I liked less (although there was a meme my friends used to chant in highschool and now it’s stuck in my head again), there wasn’t anything to annoy me about the writing or the way the characters were written or the plot. I couldn’t find anything to critique, honestly. I can’t believe this was Albertalli’s debut novel, it’s so, so good. What I also noticed how well she seemed to understand teenage culture and that you can definitely get to know someone just through talking with them over e-mail.

It’s just such a precious, laugh-out-loud-funny, warm, fluffy, lighthearted book about coming out, dealing with people being awful sometimes, making mistakes, owning up to your mistakes, love, friendship, family and figuring out who you are, without using any clichés whatsoever. It feels fresh and new while also just being a nice, sweet YA novel.

This book is just pure entertainment. I will want to reread it many, many times (gotta get my hands on a copy of my own now!). I ordered Leah On The Offbeat and I’m so excited to read that one as well, so there’ll be a review in the near future! I’m also really looking forward to the movie, and I’ll write a review and a book/movie comparison soon too!

Have you read Simon vs The Homo Sapiens Agenda? What did you think? Let me know in the comments!

24 thoughts on “Simon vs. The Homo Sapiens Agenda by Becky Albertalli” 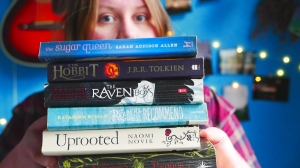